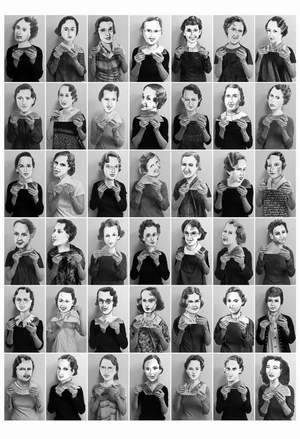 Judith Henry has three large pieces in the show, “Women Choose Women Again” at the Visual Art Center of New Jersey in Summit.  The show, spanning three galleries of the Center, runs through April 13, 2014. Opening reception is Sunday, January 26 from1-4pm.

“In a 2013 piece titled “Fargo High School (1935) Senior Girls,’’ from her “Girls, Girls, Girls’’ series, Henry drew 42 portraits of teenage girls from the titular yearbook and photographed herself wearing each as a mask. The gridded image elicits the quirky blend of pathos and humor so characteristic of her oeuvre.”

Judith exhibited work from her series, “Rebirth” and “Masquerade” at the Davis Orton Gallery in 2012.