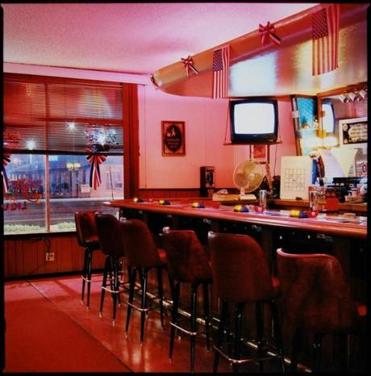 Stefanie Klavens’ photographs are part of a three person show, “The Space in Between” at Boston’s Photographic Resource Center (PRC) with Daniel Feldman and Lynn Saville.  Reviewed today by Mark Feeney in the Boston Globe, Feeney states, “There’s an air of expectancy to the sites Klavens has photographed for her portion of the show, “Lonely Places. Those places have clearly been lived in and used, yet now are empty — for the moment? For a while? For good? Part of the kick of these striking images with their very rich use of color is that nothing indicates an answer to those questions. What’s most arresting about her pictures is the overall effect: the way atmosphere solidifies into subject. But very much enhancing that overall effect are the little things Klavens notices……” The show runs through January 19.

The Davis Orton Gallery exhibited photographs from Klaven’s “The Art of the Movie Theater, A Disappearing American Tradition” in 2011.