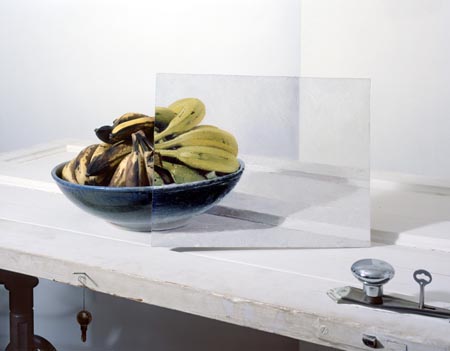 From Studio Physics by John Chervinsky
The Huffngton Post’s Haiku Reviews  recently included a piece about John Chervinsky’s “An Experiment in Perspective.”  John exhibited work from this portfolio at the Davis Orton Gallery in 2010.  We are delighted to report he’s returning to Davis Orton in October with photographs from his new color portfolio, “Studio Physics.” 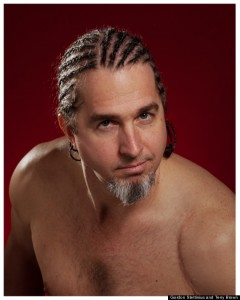 Meanwhile, Gordon Stettinius continues to gain fame and noteriety.  An accomplished photographer, publisher of, among others, Shelby Lee Adams’ book, “truth & salt”  (Candella Books –  available at Davis Orton Gallery) and brand new gallerist in Richmond VA, Gordon’s international press has focused laser-like on his on-going series with Terry Brown, “The Mangini Studio Series.” The Huffington Post article, “Intensionally awful Studio Portraits…” with lots of great head shots seems to have gotten it right.  Wired has also featured Gordon and this series.
Stop by the Davis Orton Gallery to see selections from The Mangini Studio Series.  It was one of the first portfolios exhibited in the gallery’s Portfolio Showcase calls for work.  Also ask to see this photo (left, “CornRows by Gordon Stettinius) inscribed to Karen .. It reads, “To Karen, Our time together was awesome.”