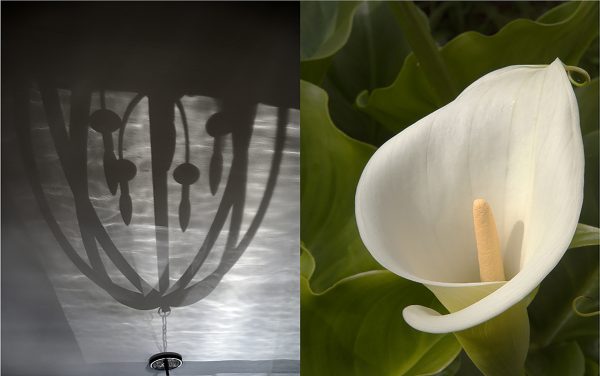 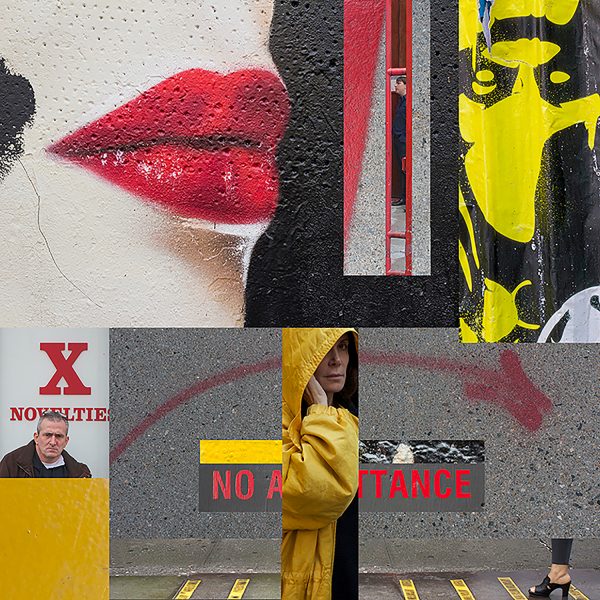 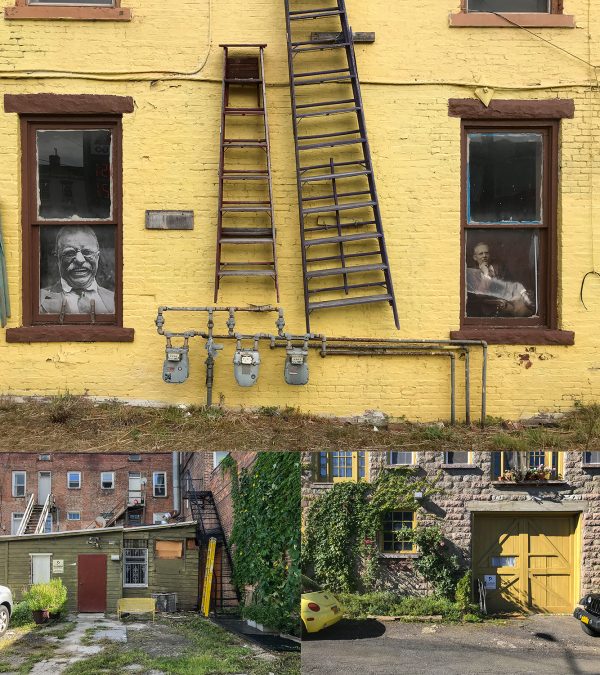 Moira Barrett
I Am the Weather (daily notes on turning seventy) 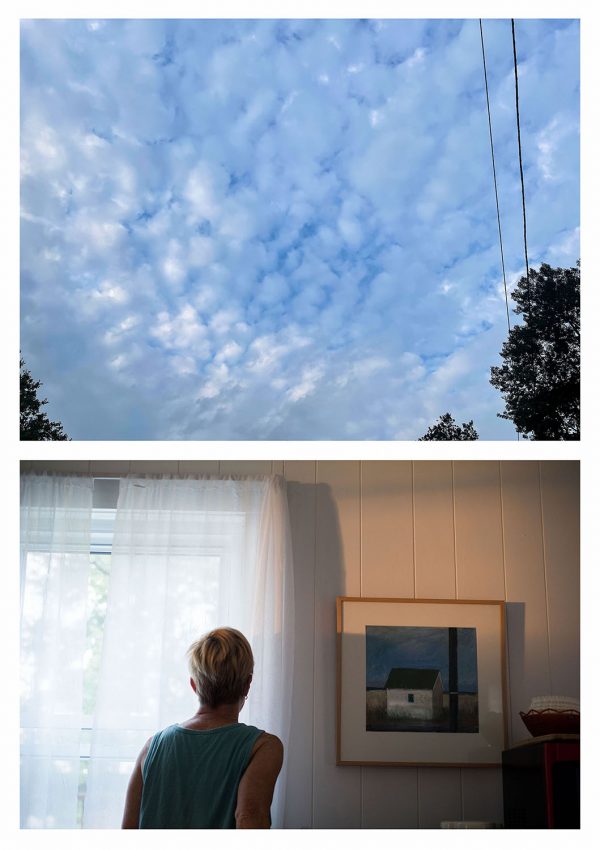 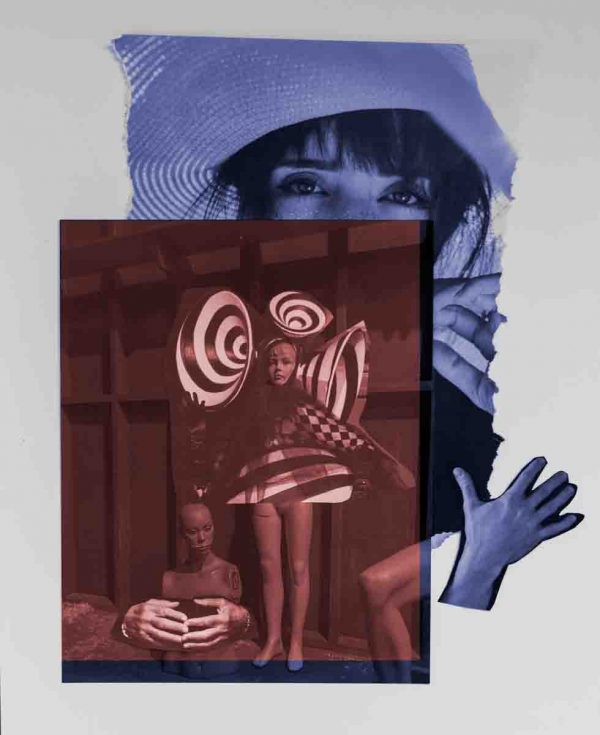 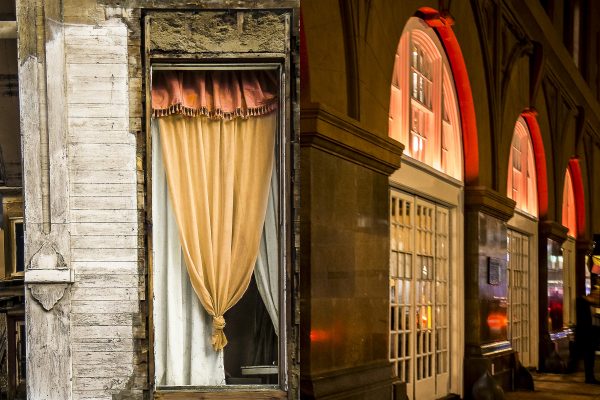 About the Artists and Their Work 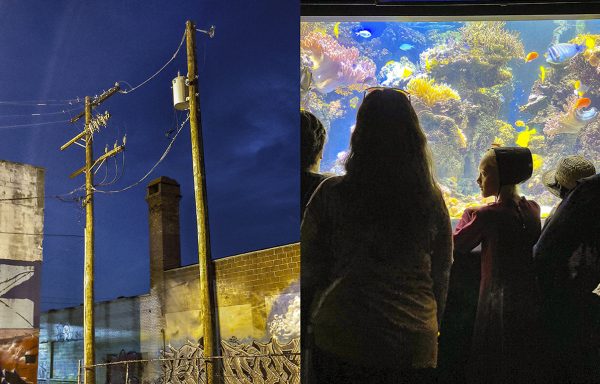 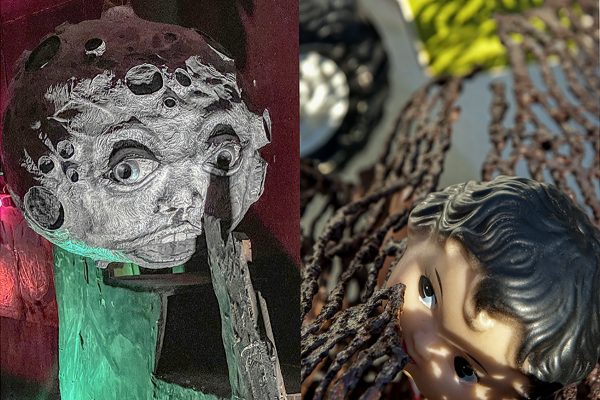 Bio
Cassandra Goldwater uses photography to wrestle with current events and histories both personal and political.  While many of her images combine found objects, she is also drawn to the interplay of the natural environment and imagination.

Her photographs and sculptures have been featured at the Davis Orton Gallery, Hudson NY, and have been exhibited in group shows at the Griffin Museum of Photography, Winchester MA,  DeCordova Museum, Lincoln MA,  Bedford MA Library, LexArt, Creative Connections Gallery and Lexington MA Open Studios Her commentary on the photographic work of Jennette Williams and Jellen van Meene appears in the Women’s Review of Books.

Ms. Goldwater studied photography at the DeCordova Museum, New England School of Photography, New Hampshire Institute of Arts and Science and Griffin Museum of Photography.  She has studied with Cig Harvey at Santa Fe Workshops and Sean Kernan at the North Country Workshops. 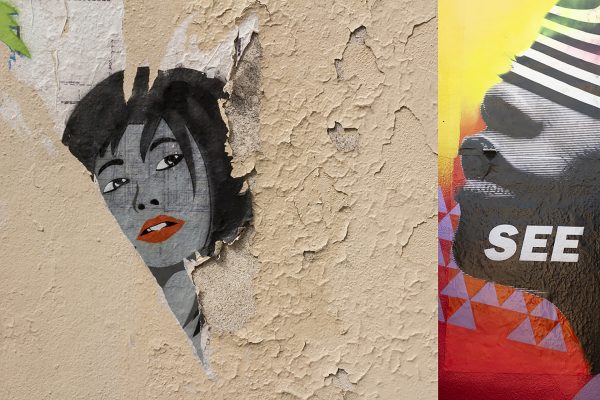 A Reckoning, pigment print, edition of 7 by Ellen Feldman 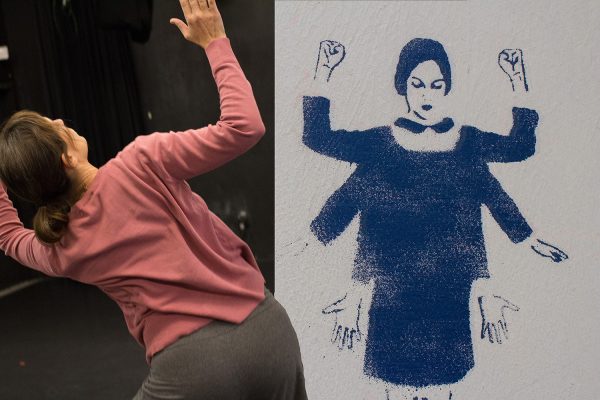 Woman With Many Arms, pigment print, edition of 7 by Ellen Feldman

Encounters combines Ellen Feldman’s roots in street photography with her more recent exploration of constructed images, or montage. In her street photographs, she catches people in their environment; she look for gesture and expression, fleeting juxtapositions, color, and nascent drama or narrative.

In this series, she presents single-frame street photographs that capture montage-like juxtapositions of subjects, as well as actual montages, which are constructed from entire photos or their fragments. Sometimes the artificial nature of montage is hard to detect; other times it is celebrated.

In both her street photography and her composites, the subject is generally the grit of urban life. She seeks out the complication of visual properties, such as scale, perspective, line, color, and the relation of figure to ground. While the results may veer toward abstraction, her reality-based sources and suggestions of narrative are always present.

Bio
Ellen Feldman is a fine arts photographer, whose work includes street photography and long-term projects. Her work reflects her film studies background—in the primacy of physical gesture, bold color, and a sense of narrative.

Feldman created the photobook “We Who March: Photographs and Reflections on the Women’s March, January 21, 2017,” with contributions by thirty photographers. She created a photo/comic book: “The Dancer as the Invisible Girl,” and two books of street photos: “Les Mystères de Paris / Paris Mysteries” and “A Week in Prague: Wall People / Street People.”

Feldman is Photography Editor of the Women’s Review of Books, published by Wellesley College. She holds a Ph.D. in Cinema Studies from New York University. 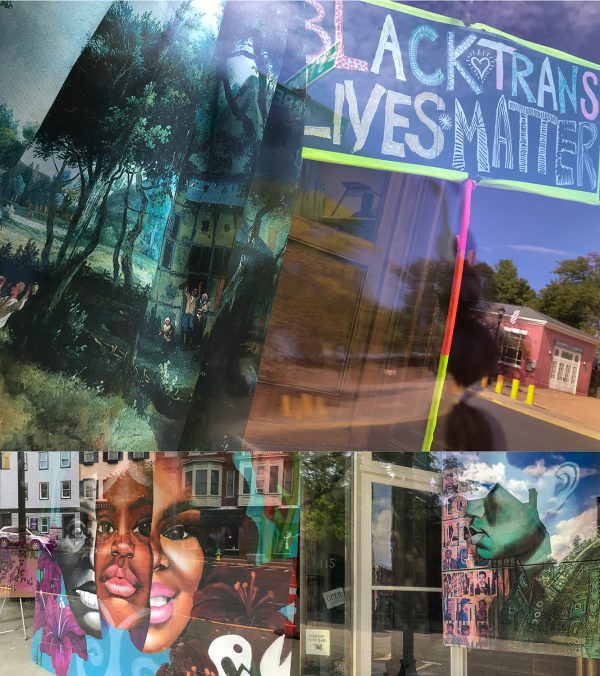 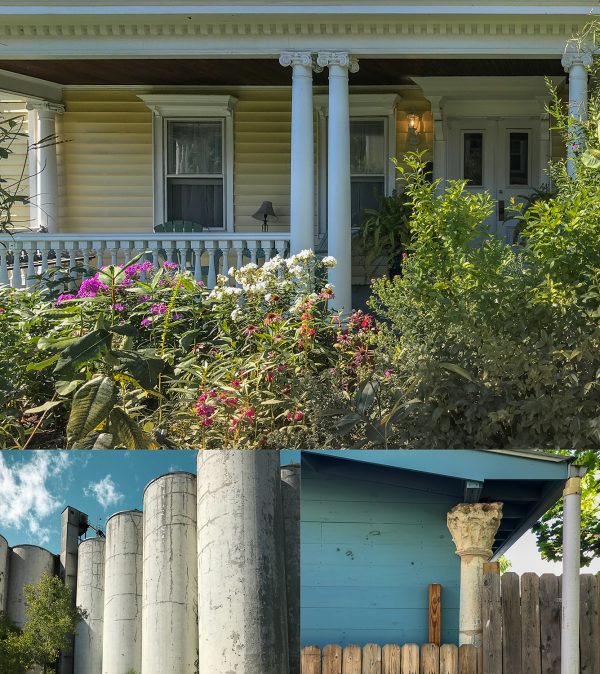 Bio
Karen Davis’s work is featured at the Massachusetts Museum of Contemporary Art and in the collections of Center for Photography at Woodstock; Lishui Museum of Photography (China); Houghton Rare Books Library, Harvard University and corporate and private collections. The second edition of her word and image book, Still Stepping: A Family Portrait, was published in 2022. Davis, of Hudson NY, is a Critical Mass 2018 finalist and recipient of the 2009 Artists Fellowship Award-CPW. Her photographs and artist books have appeared in numerous solo, featured and group exhibits throughout the country.

Karen is curator/co-founder of Davis Orton Gallery in Hudson NY, which exhibits photography, mixed media and photobooks. She has taught portfolio development at Radcliffe Seminars, Harvard University, Lesley University and the Griffin Museum of Photography and other photo-based courses including photobook workshops and word and image art courses at the Art Institute of Boston, Tufts University’s X-College and Suffolk University.

Moira Barrett, I am the Weather (daily notes on turning 70) 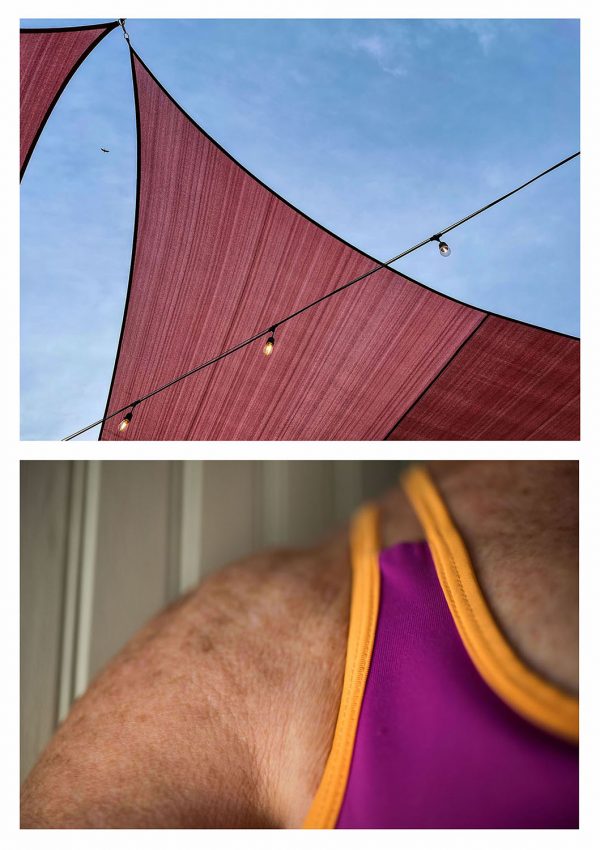 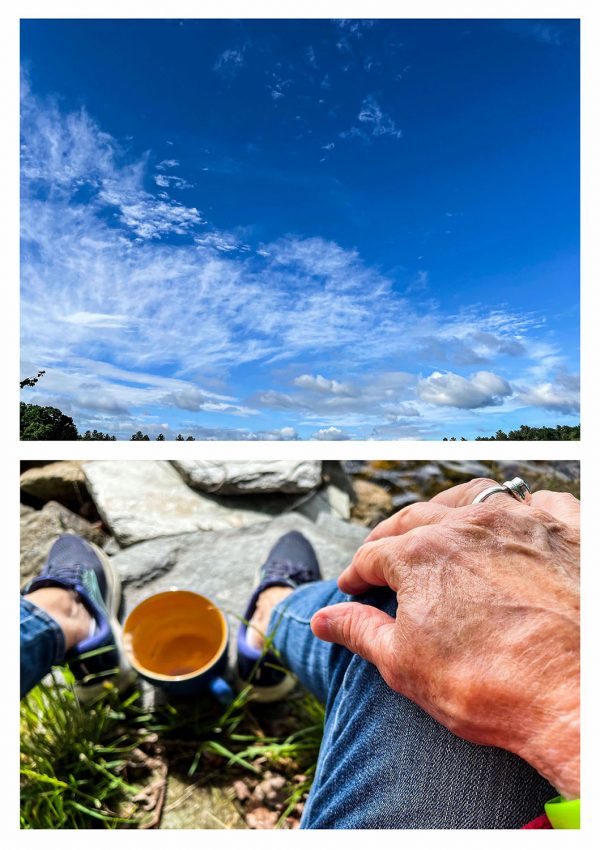 Algorithm: n., a rule (or set of rules) specifying how to solve a problem.

Moira Barrett notes, “The days pass and I grow older and perhaps even wiser. With the pandemic we have all grown used to noticing and marking the small things in our lives: the morning light, the cup on the table, the wrinkle. We have all felt confined in some way, yet one constant is the changing sky, always visible, never still.”

Barrett has passed a milestone – 70. Each day she records and memorializes her relationship to the world. She does this as a daily practice to keep her mind and creativity moving and as a way of coping with upheaval and uncertainty.  Each day she reflects on her environment and wonders: “How much of my inner climate will I reveal; am I a reflection of my world, or is the world reflecting me?”

Bio
Moira Barrett is a fine art photographer based in New England. She uses traditional and photo-transfer techniques, video, and construction to address issues of self, memory, relationships and aging.

Her work has been featured in numerous exhibitions and galleries, including Cambridge Art Association’s BLUE, RED, Northeast Prize, and 2019 Open Photo Exhibit; the Davis Orton Gallery of Hudson, NY; NAVE Gallery of Somerville, MA; Susan Maasch Fine Art Gallery of Portland, ME; and Boston Young Contemporaries juried show. Dana Hoey has reviewed her work in the Women’s Review of Books.

Moira is married to Johanna Schulman, a retired financial planner and artist, lives in Cambridge, MA and is the parent of Annie Barrett, Assistant Coach for Women’s basketball at NYU. Originally from Rochester, New York, she has a BA in Art from SUNY Buffalo and an MFA in Visual Arts from Lesley University College of Art and Design.

Portfolio Showcase:  Memory and Dreams
Selected through our International Call for Portfolios 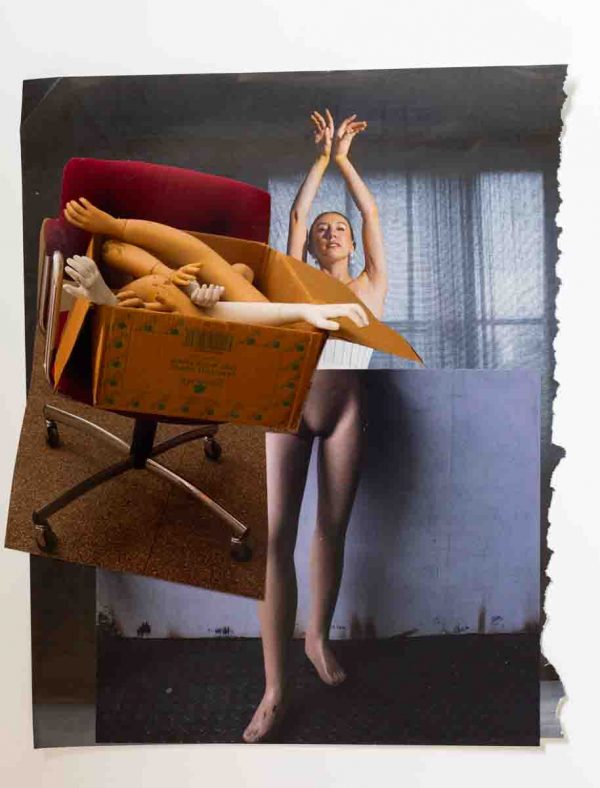 Suzette Dushi’s “Phantasm” is a series of surreal tableaus which blend fantasy with reality. Here, photographs of old, broken and discarded mannequins are collaged with cutouts and snippets from magazines, newspapers, pamphlets or any other found images to create a strange and extraordinary world. Inanimate objects become part of a real world creating tension and discomfort. Her imaginary characters become actors on a stage. Dushi’s work invites the viewer to imagine, suggest a narrative and engage emotionally with these tableaus which are fragments of a fantastical and occult world created by her subconscious.

Bio
Born in Istanbul, Turkey, artist Suzette Dushi  lives and works in New York and Long Island.
Her photographs have appeared in various group exhibitions including the Istanbul Biennial, the Islip Art Museum and the 13th and 17th Julia Margaret Cameron Award for Women Photographers. They have appeared in print and online publications including DekUnu Magazine, F-Stop Magazine, Tint Journal and ArtAscent Magazine where she was awarded Gold Artist for her series, “Winter.” Her photographs are held in private collections in the US and abroad.
Dushi studied photography at the International Center of Photography. She is a graduate of New York University with a degree in Marketing and worked as a financial analyst in banking. 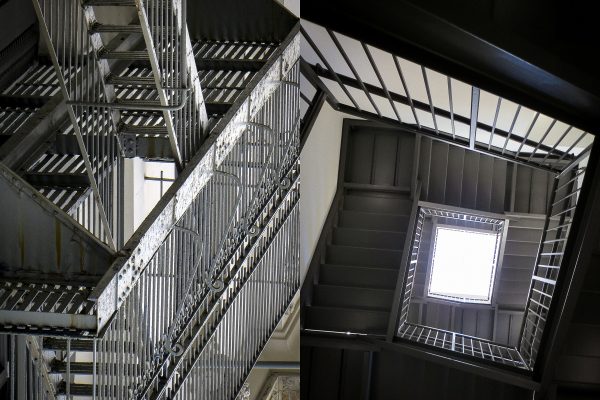 Wenda Habenicht’s “Diptychs” is an ongoing series of  two equal size images, paired and placed side-by-side. Eliminating the separation between photographs allows her images to merge and flow into each other. It’s is the relationship with one another that makes the whole greater than the sum of its parts.

Coming from a background of building wood constructed sculpture, she often begins her diptychs with subjects of architecture or structures that define and manipulate space. Her process is to juxtapose unexpected images to create a work that transforms the subjects into a new context or scenario. In this way she entices the viewer to visually enter and ponder the curious and mysterious space and logic of her photographs.

Bio
Born in Elkhart, Indiana, Wenda Habenicht grew up in Boulder, Colorado and attended Beloit College in Wisconsin before moving to New York City to earn her MFA at Columbia University.

Wenda’s outdoor sculpture installations have appeared throughout the US. Her first large scale outdoor sited work was built in 1982 at The Midwest Coast, Art and Agriculture in Caledonia, Illinois and was followed by outdoor sculpture installations built and exhibited in the Eastern & Midwestern United States and Canada. While living in Brooklyn, she created numerous works of architecturally and/or anthropomorphically derived sculpture, often participatory and many of which were sited outdoors. Her work has been reviewed in numerous journals and newspapers in the US and Canada.

After a twenty-two year hiatus from making art, Wenda started working in photography for the first time in 2012 and from there, returned to building sculpture and creating works on paper